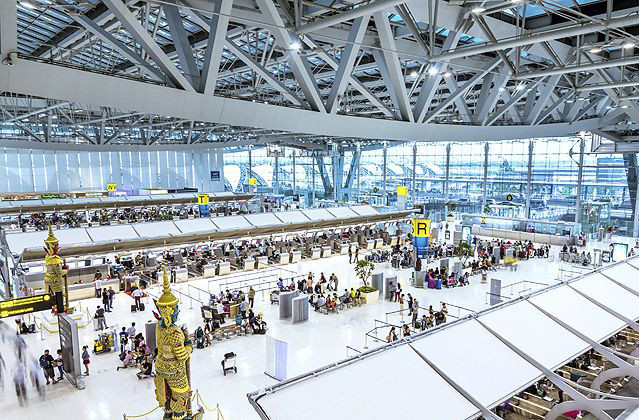 BANGKOK – Hundreds of airport workers held a demonstration in the Thai capital Bangkok on Wednesday to dispute changes to their contracts that they say strips them of basic labour rights.

The protest involved at least 200 workers for AOT Aviation Security (AOT AVSEC), a joint venture set up last year between state-owned Airports of Thailand (AOT) and three security firms, with unions saying conditions had worsened during the pandemic.

The demonstration came six months after the Thomson Reuters Foundation revealed that 10 workers at Suvarnabhumi Airport were suing ASM Security Management (ASM), saying they were pressured to quit then sign new contracts on worse terms with AOT AVSEC.

The move was part of a restructuring by AOT, which manages six airports across the Southeast Asian nation, and has been hit hard by coronavirus. The company has denied any wrongdoing.

But labour activists have voiced concerns that companies have capitalised on COVID-19 to roll back workers’ rights.

“COVID-19 has hit both workers and businesses hard, but businesses are also exploiting the pandemic to erode the rights of airport workers,” said Ampai Wivatthanasathapat, president of an airport workers’ union with about 1,700 members, including those from AOT AVSEC.

Karn Thongyai, the head of ASM, declined to comment. The first hearing of the lawsuit against ASM is set for May after three unsuccessful mediation sessions, the lawyer involved said.

The protesting workers said new contracts with AOT AVSEC, a venture between AOT, ASM, and two other security companies, left them on lower pay and without basic rights including toilet and lunch breaks and benefits such as a transport allowance.

One security guard at Suvarnabhumi Airport – who asked to remain anonymous – said she had to see two doctors last month due to urinary tract infections, adding that female staff were often forced to use men’s toilets due to distance.

Other workers were made redundant after being told they did not have the right qualifications for jobs they held.

In September, Pasakorn said workers had been “transferred” from ASM with years of prior service reflected in their pay. He said AOT AVSEC was not involved in making any of them resign.

During the protest, workers handed over a letter stating their grievances to Labour Minister Suchart Chomklin, who publicly pledged to look into the issue. The labour ministry was not immediately available to provide further comment.

“When passengers hear of the health implications of how workers have been treated, it is hardly going to provide the confidence required to get aviation industry up and running post-pandemic,” he told the Thomson Reuters Foundation.